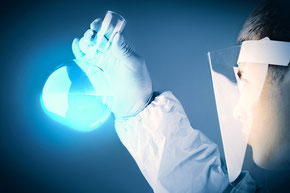 The Y-90 RadioGel™ device is a brachytherapy device comprising highly insoluble Y-90 particles delivered by needle injection using a water-polymer composite for high-dose treatment of non-resectable solid tumors that cannot be treated effectively by any other means. It is designed for maximum safety: to deliver a high, pure-beta radiation dose to target (tumor) tissue, with comparatively small-to-negligible radiation doses to adjacent normal tissues, and with negligible radiation dose to any major organ or tissue in the body.

Two key design characteristics of the Y-90 RadioGel™ device that influence safety and efficacy are (1) the ability to place Y-90 particles directly into tumor tissue via injection and (2) yttrium-90 containment within the tumor after injection.

Advanced Medical Isotope Corporation has obtained an exclusive license to eight (8) patents related to the Y-90 RadioGel™ device technology for use in high-dose radiation therapy. The license was granted by *Battelle pursuant to an option between Battelle and AMIC announced in February 2011. The Agreement grants AMI an exclusive license to make, have made, use and sell the Y-90 RadioGel™ device

Yttrium-90 is a well-established medical isotope with many applications in cancer treatment. The combination of insoluble Yttrium-90 particles and the polymer gel carrier offers physicians an opportunity to deliver a safe, effective treatment option at a low cost.

Based upon its studies and analyses, or general application of experience with current brachytherapy devices and Yttrium-90, AMI believes that its brachytherapy products are likely to offer the following benefits, among others, for patients and medical professionals:

•Half Life: Y-90 has a half-life of just 2.7 days. Many traditional brachytherapy products use isotopes with longer half-lives such as 9.7 days for cesium-131, and sixty days for iodine-125.

•Optimized Delivery Method: Current brachytherapy devices place permanent metal seeds in the prostate by using up to 30 large needles. By contrast, AMIC’s Y-90 RadioGel™ device is designed to be administered in a minimally invasive procedure with small-gauge needles.

•No Permanent Seeds Remaining: Current brachytherapy devices place permanent metal seeds in the tumor. AMIC’s Y-90 RadioGel™ device utilizes a biodegradable, non-toxic polymer that is ultimately absorbed by the body. This eliminates the possibility of a long-term seed migration or other problems that may sometimes arise when seeds remain in the body.

•Good Safety Profile: Many traditional brachytherapy devices utilize isotopes that emit x-rays (akin to gamma radiation). X-rays or gamma radiation travels within and outside of the body and have long half-lives. AMIC’s brachytherapy products use the Yttrium-90 isotope, which is a beta-emitter. The Yttrium-90 beta-emissions travel only a short distance and has a short half life of 2.7 days.